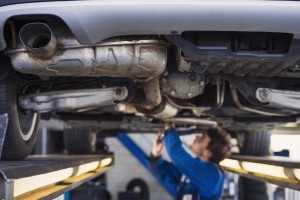 A vehicle that is equipped with a start-top system shuts down its engine when it isn't moving, at which time the battery will power the electronics. The technology is also called "idle stop." Much like an electric car doesn't use battery power to move itself when it's idle, a start-stop-enabled car doesn't use gas as it sits at a stop light. The technology was most common in hybrid vehicles until recently. But how much fuel can you save with this technology? Are there any downsides to it?

How Much Fuel Can I Save with a Start-Stop Vehicle?

AAA says you can save up to 7% on fuel annually. That may equal around $179 per year, they say. That estimate was based on a fuel price of $3.65 per gallon. You may not save as much if fuel is cheap in your area. However, the percentage savings may be the same or better. You will also reduce carbon emissions. There were three vehicles used in their tests. They were the Ford Fusion, the Mercedes Benz CLS550 and the Chevrolet Malibu.1

Edmunds realized savings with other models featuring start-stop.2 The 2014 Mini Cooper saved 9.5 percent when the air conditioner was off, but only 2.9 percent when it was on. The 2014 BMW 328i GT reduced fuel consumption by 8.6 percent, or 2.5 mpg, with its start-stop technology.

One problem with start-stop is the slight delay from the time you press the gas pedal until the time the car starts moving forward. The forward traction isn't instantaneous, as it is with almost all other vehicles. However, the delay is very brief, a fraction of a second, and you can usually turn start-stop off.

Another problem is the excess wear the technology causes. For drivers using today's conventional mechanical technology, a start-stop system will wear an engine more quickly. This is due to lubrication that essentially doesn't lubricate until after the engines starts. It's not a problem for cars that start 50,000 times during their lifetime. But start-stop cars might have to start up ten times that many times. So oils called "low friction lubricants" are being tested. Soon, they'll have to be implemented.3

Lastly, air conditioning and heating don't work without a running engine. Your car's temperature will change when you sit still for prolonged periods. This isn't a problem in good traffic conditions but during severe traffic jams, it's not good.

Start-stop technology might save less fuel than it would require to make us really excited. But, any fuel savings is good and start-stop technology doesn't add a huge cost onto vehicles. It pays for itself quickly; although, it may cause engine trouble in the long run. Start looking for superior lubricants in order to prevent that. Today, start-stop is not included with many affordable cars but that will change with time, as long as hybrids and electric cars don't take over the market completely. That wouldn't be so bad considering the great new hybrid and electric models we've seen.

Are you shopping for a vehicle? Make sure you get quotes online before you visit any dealerships. Click here to learn more.